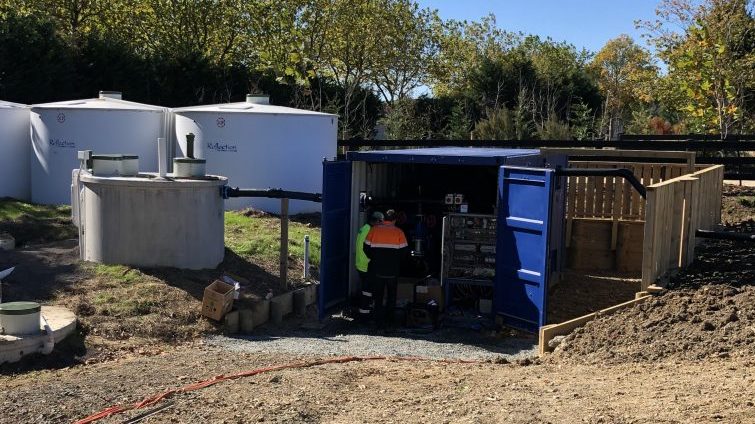 Installing infrastructure at the early stages of a residential housing development can often disrupt the staging process and the cash flow of the project. Vacuum sewerage systems can make it easier. Clevedon township showing some of the future development area.

At Flovac, our engineers have used deployable engineering solutions that will be incorporated into long term projects.

The town of Clevedon in Auckland New Zealand is finally beginning the process of eradicating septic tanks which have been causing environmental problems and will install a new Flovac vacuum sewerage system. Growth in the town had been on hold due to the lack of a proper municipal sewerage system. This has impacted on the restaurants and commercial premises and the increased demand on housing which is just a short drive to Auckland City.

Gravity sewers were looked at for the area, but a very high water table made that a very expensive and disruptive alternative. Low pressure grinder pumps were also looked at but with an ultimate population of more than 6,000 people costs made that prohibitive. There were also other downsides with looking at grinder pumps where the local utility has had some terrible experiences. An increasing number of severe storms meant that power outages left communities with no access to sewer services. Also off sewage during low flow periods put added pressure onto Treatment Plants. The main issue was also the reluctance of the community in having sewerage infrastructure on their properties which would need to be accessed whenever problems arose.

The proposed vacuum sewer system will require only a single vacuum pump station and all sewage infrastructure will be outside the property boundaries. There will also be far less impact on residents as installation can be a lot faster than a gravity installation as all pipework will be shallow in the ground and so less de-watering will be required.

An adequate system for seismic areas

Watercare, who is the water and wastewater service provider for the greater Auckland area, is leading the project and has had a lot of experience with the successful Flovac vacuum sewerage system at the town of Kawakawa Bay which has won a number of engineering and environmental awards. Members of the project team have also visited the successful projects that were installed in Christchurch NZ which replaced systems impacted by large earthquakes. Auckland is also in an earthquake zone, making vacuum systems an even better solution.

As the township of Clevedon connects up to the sewer network, a number of new residential developments will also be built and will connect to the system. The vacuum sewerage system is versatile enough to cope with developers adding on new houses as they are built over the coming 10-15 years.

As there are multiple developers involved in the project, the timing of infrastructure installation can be difficult. What roads need to be built first, which group of houses need to be serviced first.

One well know developer with a small block of 26 houses positioned at the very end of the catchment wanted to develop their land well ahead of the infrastructure being ready for connection. As it is a major project it will take over two years to complete and possibly longer before the pipework reaches all the way to the end of the catchment. Working with Flovac’s engineers, an interim solution was proposed and Watercare was flexible enough to allow the developer the opportunity of utilising short term infrastructure.

Flovac’s deployable sewerage systems have been used in a variety of projects around the world, including at the London Olympics. You can see details of the projects here. The developer installed the vacuum mains and house connections as well as the Flovac collection pits. A plug and play containerised vacuum pump station was positioned next to a temporary treatment plant and the system was connected up. Once houses are built, local plumbers can connect to the vacuum pits. The system will be operated and maintained by a local operator with support from Flovac. As the station and all of the collection pits have wireless monitoring, Flovac’s operations centre in Sydney Australia can provide 24 hour support.

When the time comes, the deployable system can be moved on to the next project and the vacuum mains connected up to the main Clevedon project mains and vacuum pump station 4 km away. The developer has spent a minimal amount of money which allowed them to start selling houses significantly faster than traditional methods would have allowed for.