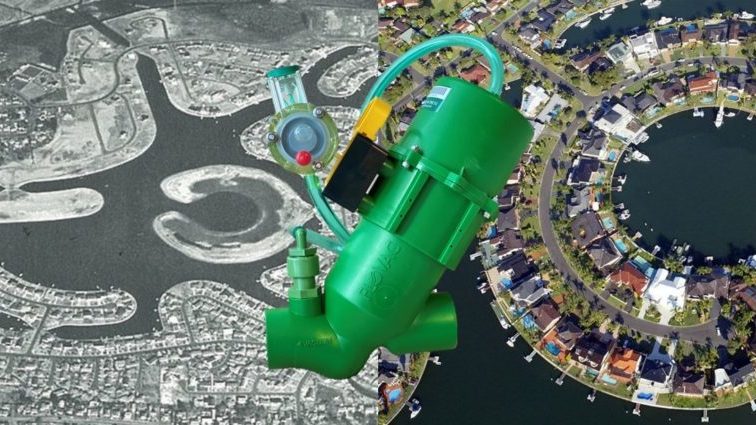 Early vacuum sewerage systems are about to get a makeover thanks to the new 2-inch vacuum valve developed by Flovac R&D team in conjunction with the production team in The Netherlands. Clients from many parts of the world had struggled with getting reliable and easy to use vacuum valves to fit the earliest vacuum systems installed in the 1960’s and 1970’s.

Joel Lillienthal, the pioneer of modern vacuum systems granted early patents to Electrolux for the development of the vacuum sewerage industry in the early 1960’s. Those systems were developed using 2-inch (50 mm) vacuum valves as many were used for just grey water, marine applications and single house applications. Modern vacuum systems all use 3-inch or 90 mm vacuum vales and this is a requirement under most standards.

The 2-inch valves that were installed in many of those early projects used a membrane type valve and an old fashioned ball float controller, similar to what was used in old toilet cisterns. Both the membrane valve and ball float increased operational problems in these systems as did the smaller 2-inch size of the valve. As most plumbing fixtures within the house had a 3-inch clearance the vacuum valve became a choke point.

Use of 3-inch valves

The development and use of 3-inch valves in the 1970’s reduced the rate of blockages and vast improvements to the technology in the years since have meant that vacuum sewers are the preferred alternate sewage system in many countries. Sadly most of these early vacuum sewers had corresponding size issues with smaller diameter pipes and small diameter collection pits for holding the vacuum valves. This meant that it was often impossible to replace the existing valves with modern larger ones.

Although there are still many hundreds of vacuum systems left from the sixties which are still working, they do have high operational costs and problems can be difficult to find. This has caused some anxiety around vacuum technology in area’s where these systems still exist.

Flovac’s production team have been working for some time on developing a 2-inch valve to help out numerous clients from around the world. What clients had asked for was something that was y similar to our 3-inch valve. Clients felt that it was the best valve and controller in the market and wanted as many of the same attributes as possible. What has been developed is very similar and includes the ability to unscrew the top half of the valve from the bottom without using any equipment. The controller also has a quick release key.  The internal free ball passage of the FLOVAC 2-inch interface valve is with 55 mm the biggest free ball passage in the existing market. This with the self-cleansing extra wide Y-body, results in higher efficiency and less chance of blockages.

As an addition they have managed to make it compatible with either the cable or wireless monitoring systems.  A 2-inch valve is always going to be more susceptible to blockages so getting an alert when one occurs and in which valve it is occurring will cut down operational time considerably. Another very important reason for the use of monitoring with these old systems is that many suffer from infiltration from groundwater and stormwater. Some of these systems are now 50 years old, pipes and pits are cracking and breaking. Monitoring makes it possible to target specific areas for rectification, taking away the guesswork. The new Flovac 2-inch valve has not been developed for use in modern municipal system as only 3-inch valves should be used in residential area’s. One area that the 2-inch valve might find a market though is for when we do grey water only systems or smaller indoor systems. Grey water systems do not have solids and so there is little to no risk of blockages.

The new 2-inch valve will be on display at the worlds largest water industry expo at IFAT in Munich in May 2020.