Flovac Poland attended the 25th edition of the International Fair of Machines and Facilities for Water Supply and Sewage Systems (WOD-KAN Fair), which is held annually in Bydgoszcz, Poland. Flovac’s engineering team, Jacek Sebesto and Wojciech Kubik, were there to showcase the different projects carried out and the products offered by the company. 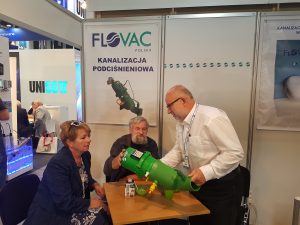 WOD-KAN is one of the most important economic events in Poland and one of the biggest events in Europe. The trade’s offer is mainly dedicated to the water supply and sewage system industry. Each year almost 400 exhibitors and 10,000 visitors (specialists including technical directors, designers, fitters, operators, engineers and presidents of water supply and sewage system companies) attend the event.

Poland has one of the largest uptakes of vacuum sewers in all of Europe due to the very flat terrain right across the country. Nearly all of the systems have been for septic tank replacement schemes, mainly funded by the European Union. The Flovac team has been at the forefront of the vacuum industry in Poland and had designed and installed more projects there than all other companies combined. One of Flovac Poland’s key developments has been a valve monitoring system using a cable network that is seen as the most advanced system of its kind. This system has been rolled out to a number of countries throughout Europe, America and even Australia. 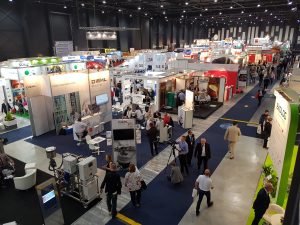 25th edition of the WOD-KAN Fair

Vacuum sewage systems are the best solution for flat terrains, where the lack of natural gradient doesn’t allow gravity systems to work properly. Flovac vacuum pipes are designed to be as shallow in the ground as possible, and are laid at a 1/500 grade. The contractor builds steps in the pipework to keep the mains from getting too deep. Thanks to this technology, wastewater can be efficiently transported at surface level through the pipe network even if there is no natural slope.

Unlike the gravity system, the Flovac system can be installed in any type of terrain. Also, it is less expensive since it doesn’t require deep trenches in the ground, which means less excavation works.